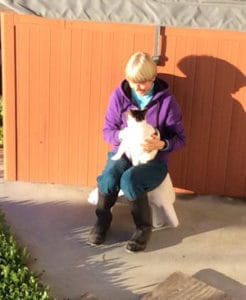 From time to time we see feral cats roaming the fields of our farm and those around us. One such cat was a mostly white fellow who bolted at high speed whenever our paths crossed. On a late August day 4 ½ years ago, however, he ran a short distance down a hill before hiding. Then, he peered out to look at me, only his ears and eyes showing. I said hello, and since I’d seen him scavenging around our compost area, I told him I would go get some food and put it there. Sure enough, when I came out of the house with a bowl of cat food, he’d moved down the slope and was waiting, still mostly hidden, about 15 yards from the designated spot.

From that first meeting, I fed the cat, now named Bunny, once or twice a day near a blackberry patch in our pasture. He was hungry, meowing for food, yet hissing and running to hide as I delivered his meals. I named him Bunny because all I saw for quite a while were his ears and eyes and the top of his mostly white head.

In the spring of 2016, Bunny suffered a paw injury and was trying to get around on three legs. This was a life-threatening situation for a wild cat who has to avoid coyotes and foxes. We decided to trap Bunny and take him to a feral cat organization called Forgotten Felines. They gave him medical care for a paw abscess and neutered him. We released him back at our farm and I continued to help him with his injury by giving him homeopathic remedies in his water.

In the fall of 2016, Bunny decided to move into the side yard next to my house. Once he made it clear he was staying, we made a bed for him out of a large spare piece of drain pipe. The distance between us at feeding time went from 15 yards to 15 feet, then closer. He started rubbing up against the wire of the fence and rolling on the ground. So, I started petting him through the fence. One pet led to another. And now, when I go into his part of the yard, he rubs against my legs and leaps into my lap for serious petting before running to his food bowl. My dedication to feeding Bunny almost every day for several years evidently convinced him I could be trusted. And his showing up to receive the food and affection I offered has earned him a special place in my heart and our family. 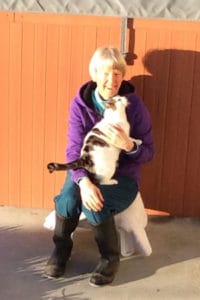 As you might have guessed, Bunny is now living in our house, with time spent in the backyard and local fields. His primary domain is my office where he spends time on my lap helping me type various articles and correspondence. He’s made friends with our house cat Maple, yet remains quite wary of other people. I treasure the affection and trust he gives me every day.

This site uses Akismet to reduce spam. Learn how your comment data is processed.